"There are no heroes in the story of artschool, only various levels of shame."
-Me.

When I applied for artschool, back in the summer of 2007, I had myself a few misconceptions.
I’d imagined some kind of art academy where crack troops of artists drew perfect circles while bench-pressing lithograph stones, and spent sixteen hour stretches down in the lab, creating shades of blue so pale they would make a blind man weep.

As it turns out this is not the case.

As far as I can tell, getting into artschool requires either; art ability and a keen mind, OR the desire to hang out at artschool.  While I lacked the second, fortunately I had the first and was successfully admitted.

Perhaps I’m not being fair, but it really bothers my brain that there could be some people who fail to get into artschool.  If you have within yourself the ability to apply paint to your face and face-but a piece of paper, I’m fairly sure you have what it takes.

First year was probably my most misguided.  For some reason I thought I could get ahead by working extremely hard and completing all my work to a ridiculously high standard.  One of our assignments was to create a series of 9 small artworks the size of trading cards.  Most people found a drawing they’d done years ago and cut it into nine pieces.  I handed in twenty seven individual artworks; a number whittled down from many more.

Here are a couple of examples of my cards. 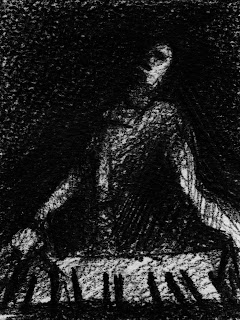 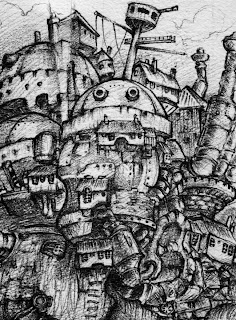 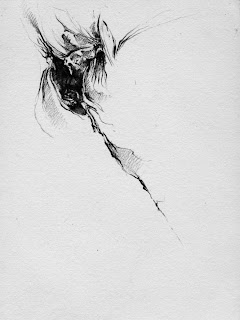 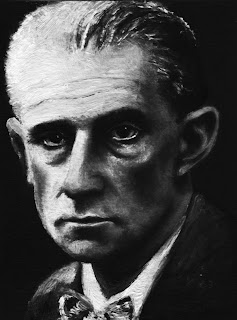 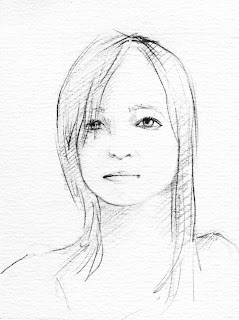 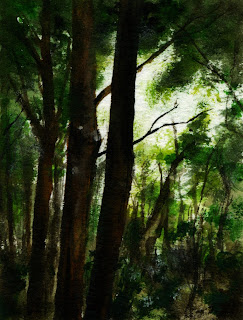 In the end, I got a high mark, but not higher than most people.  Nothing singled me out.

Artschool runs a drawing prize each year.  In first year I entered with this drawing. 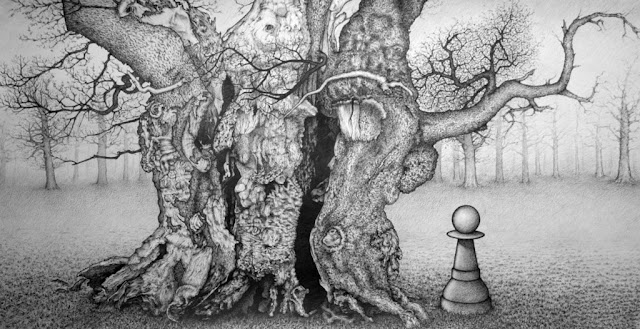 Which is something of an assault upon the eyes, but still an interesting sketch.

While it did get hung, I suddenly realized that it was the only figurative drawing in the entire exhibition.  By which I mean it was the only drawing of something.  Every other drawing was about the act of making marks on something.  The prize that year was won by a girl who’d glued a small pile of dried paint to the wall.
I did not enter the drawing prize again.

In fact it was at about this point that I realised my own values, and the values of artschool, were hopelessly misaligned.  I thought about dropping out, but I couldn’t think of anywhere that I’d be better off.  So I soldiered into second year.

Let me just say right now that some of the students of artschool were the nicest people you could ever hope to meet in your life, and their enlightened and enthusiastic appreciation of all kinds of art was a true inspiration.  Unfortunately, in my case, their opinions often diametrically opposed the views of the school.

The next project I remember was an open-ended drawing project where we were supposed to try something new and interesting.  I decided to hand-draw a tiny animation loop of a girl reading a book.  If you like you can watch the film here https://vimeo.com/17718992
For reference, this is one of the frames: 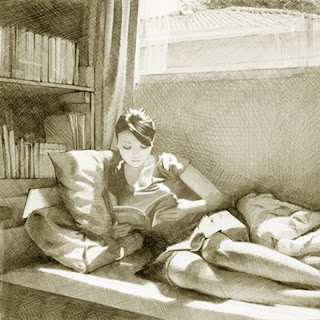 Most people in the class didn’t go to quite that much effort.  One girl stuck foil patty-pans to a sheet of paper and dripped some white paint onto them.  And I think the guy who topped the class took a long-exposure photo of himself riding around in circles with LEDs on his bike.

Towards the end of second year I was really suffering.  I just couldn’t make any sense of artschool, and I was concerned that there was nothing about art that I still liked.  The only art that I really adored was the films of Hayao Miyazaki.
I decided to throw down my own gauntlet and go all or nothing.

I told my tutor that I would spend third year making an animation with paint.  He looked at me and said “Why don’t you move to a different course? I guess you’d still have the same problem, though.”
After answering his own question he walked away.
Fortunately, by this time, I had become quite adept at channelling my frustrations into a tumour.

I immediately began work on a short film about a dystopia set to a track by Bach.  By the end of semester one I had completed all 260 drawings and had set them to the music, with only the painting to go.
My tutor had to give me a mark for the semester’s work.  I presented the film to which she had two comments.  Two pearls of wisdom, which I may learn from and grow.
She said, “I don’t like the last frame.”
And, (my favourite) “Why don’t you get rid of the music?”

For the semester I received my lowest mark ever.  Not just at artschool, the lowest mark I’ve ever got for anything in my life; 55%.

By this stage I was getting better at pretending I wasn’t bothered by the old School of A, so I powered ahead with painting the frames.  I had to work my job most weekdays so I painted on weekends, clocking more than 11 hours on some days.

I finished just in time, and presented the film to a panel of various heads of schools.
They reached a consensus; they loved it, and gave me 90%.
If you have a hankering to check the film it is here https://vimeo.com/16489006 Perhaps artschool made me strong, perhaps it taught me about the cold and erratic nature of reality.
That’s too easy.
Its job was to foster passion for art and to provide sound (or at least mutually consistent) direction.

It doesn’t really matter.  If you’re a drawer you draw.  Or alternately you’re a box-shaped container that fits into a piece of furniture in such a way that it can be drawn out horizontally to access its contents.
Posted by Simon Petocz at 19:48 No comments:

It always seemed a strange idea to go and buy a non-fiction book, particularly if it doesn't contribute to your resume.  If you want to know something you can look it up on the internet.

Then one day I bought a non-fiction book and now I have to remind myself to read other things, like fiction.  Perhaps not everyone has a depraved obsession for facts, but I actually find them calming.  There's something about a stockpile of potentially worthless knowledge that makes me want to burrow inside and hide in... like an igloo.

Every now and then I read something interesting, and I thought it might be fun to pass the knowledge around.  Like an even more fun version of chlamydia.

This is a paragraph from a book called "The Fabric of the Cosmos" by Brian Greene, which is a layman's guide to cosmology, quantum physics and string theory.  Somehow it's an absolute joy to read; there's even a couple of quotes from The Simpsons in there :D

"Averages are useful for many purposes but, by design, they do not provide a sharp picture of underlying details.  Although the average family in the U.S. has 2.2 children, you'd be in a bind were I to ask you to visit such a family...  So, too, familiar spacetime, itself the result of an averaging process, may not describe the details of something we'd like to call fundamental.  Space and time may only be approximate, collective conceptions, extremely useful in analysing the universe on all but ultramicroscopic scales, yet as illusory as a family with 2.2 children."

It's fascinating to think how easily an averaging process can throw off our perception of fundamental reality.


I was going to end the post here, but then I realised I had not yet included a rip on God, or a fart joke, so here is a section of Richard Dawkins' "The God Delusion" that rectifies the situation.

The chapter is running through a series of historical arguments by Thomas Aquinas for God's existence, and showing how they can be refuted.

"4.  The argument from degree.
We notice that things in the world differ.  There are degrees of, say, goodness or perfection.  But we judge these degrees only by comparison with a maximum.  Humans can be both good and bad, so the maximum goodness cannot rest in us.  Therefore there must be some other maximum to set the standard for perfection, and we call the maximum God.

That's an argument? You might as well say, people vary in smelliness but we can make the comparison only by reference to a perfect maximum of conceivable smelliness.  Therefore there must exist a pre-eminently peerless stinker, and we call him God.  Or substitute any dimension of comparison you like, and derive an equivalently fatuous conclusion."
Posted by Simon Petocz at 05:00 No comments: