Some Things Are Great

And it’s high time they were listed here.

2.  When an arbitrary high five makes a noise like a gunshot.

4.  When Stephen Hawking was featured as a character in an episode of Futurama, he came to the studio and did his own voice for the show.

5.  Reading a menu.  You are the lord of a food empire, the best kind of empire.

6.  When the postman leaves your package at your apartment door rather than making you go and pick it up from the post office.  There’s nothing I could’ve ordered that would be worth that hassle.

7.  Random compliments that may not mean anything to anyone else.  Like when my musician uncle told me I was one of the few people who could whistle in tune.

8.  Reading a book in the middle of the day while a kitten sleeps on your neck. 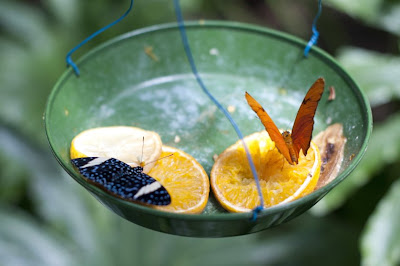 http://www.andrewmccalman.com/canadapicturelog.php
You will laugh, cry, and throw your inner-photographer in a bin.

14.  Getting home from work dead tired, putting a bunch of food in the oven, collapsing on the couch and starting up Final Fantasy.  Heaven on earth.

A book is made from a tree. It is an assemblage of flat, flexible parts (still called "leaves") imprinted with dark pigmented squiggles. One glance at it and you hear the voice of another person, perhaps someone dead for thousands of years. Across the millennia, the author is speaking, clearly and silently, inside your head, directly to you. Writing is perhaps the greatest of human inventions, binding together people, citizens of distant epochs, who never knew one another. Books break the shackles of time, proof that humans can work magic.

21.  And finally, this picture by Tim Rendall: 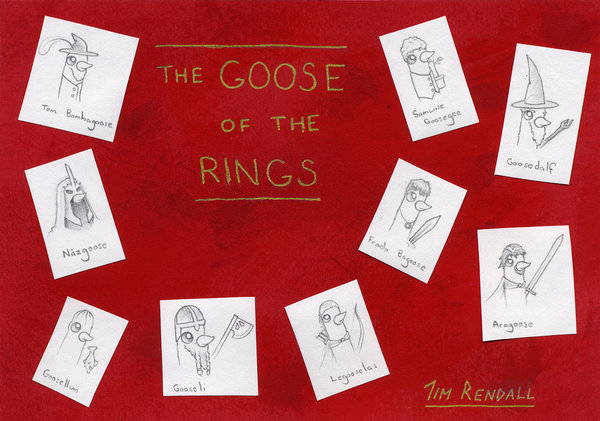 Posted by Simon Petocz at 18:33 No comments:

Over the last couple of years I’ve been laying the foundations for a graphic novel called Synthetic.  For my records as well as yours, this is how it’s come about.

It was the summer of 09/10 that I started Synthetic, a date that really indicates when I finally realised the previous story I’d been working on was beyond salvation.

The previous tale did have some nice ideas.  It was about a couple of peeps who could use superpowers at the cost of disillusionment.

I dropped everything except the two characters and started a tale of synthetic humans discovering their origins.

Actual writing is painful as hell, but composing is a delight.  Any day I had free I could be found meandering along the trails near my place, throwing some ideas around.

I find being in motion is great for grabbing ideas out of the air.  It’s like the practical side of the brain is occupied with the movement and allows the other side to tangle itself up.

The downside is that the freedom allows 99% of the time to be spent idly pondering pokemon.

Synthetic began in about fourteen different ways, had at least six middles and one good ending before being entirely reworked to begin in the middle, and end with the exact same scene as the beginning.  Swathes of characters were conjured up and cast aside. As soon as the blocks seemed to be falling into place I cut out everything I could possibly bear to part with, a process that is still continuing.

When I think about a story I don’t see it as words or a comic, I only ever picture things in film.  Naturally I find that I fit out the story to the length of a movie, but unfortunately graphic novels take a whole heck of a lot of pages to get anything done, and even with a ruthlessly edited story I was still looking at about 400 comic pages.

In early 2011 I wrote out Synthetic’s first script.  I then did battle with a mighty illness for three months, but managed to claw my way back.  June 2011 I began The Draft; a sketched mock-up of all the pages.  The sketches were so quick and vague that it appears the entire thing could’ve been rustled up over a weekend, but every line that was drawn on paper had about a 50% chance of being erased.  1 in every 5 sheets of paper got to a point where it was easier to ditch it and start new than erase everything.

It was at that malleable time for the story that it started to become fun.  The building blocks of the story were all cemented in, and it was time to flesh out the details.  For the first time I felt myself getting sucked into the world I was working on.  Like reading the kind of book that you want to crawl inside and never leave.  It was only a hint, but it’ll stick with me.

The draft was finished in Spring 2011, which is a fine season to be finishing anything.  I cajoled a few friends into reading it, and got some feedback.

The next step was very important.  I put the story aside for five months. I’d like to tell you this was a difficult, but summer is a grand time to be doing nothing at all.  The reason that this is important is to get some distance, so you can come back with fresh eyes, and hopefully see your work the way other people do.

When I got back in the saddle early 2012 I knew what was good and what had to go.  I compacted it down and threw in some new ideas.  Writing it up into the final script.

I’ve heard that in science a good theory is designed to solve one problem, and accidentally finds itself tying up loose ends all over the place.  I think composing a tale works in a similar way, and it’s always an amazing feeling to throw an idea into the mix and suddenly see things knitting together.

I wrote out a final script.  According to my documents folder it’s version 8, and that’s not counting the 6 versions back when I was calling it Africa.  It was now time to get serious about designing the art.

Graphic novels are not the easiest thing in the world to design.  At the end of a movie you'll see a bunch of names float over your screen.  In a graphic novel almost all of those jobs exist, you just have to do them yourself.  Just in terms of design you have the architecture, the landscapes, the settings, the characters, their clothes, their hair, their make-up, their possessions, their cars and roads and buildings and birds and clouds, the dialogue, the pace, the geography, photography, typography cartography, choreography, cryptography, lithography, pornography and cinematography.

There comes a time when you realise that you know absolutely nothing about how a 50yr old, stylish and manipulative woman would do her hair.  Or what in the hell kind of shoes she’d be rocking.  Then you try to draw two people walking next to each other and you realise you’re not worthy to hold a pencil, and should be relegated to crayons.

Fortunately I’m not like you, and had no troubles of any kind.

I spent several months sweating out some passable designs, making many a mental note that it will look like this, only good.  Then I got to work on figuring out what kind of materials I would use, how big the page would be, what I would do on paper and what would be done digitally.

I went through what feels like the most hack-ish part of the process, which was going to the art store and buying a pile of materials.  You’d think I’d like that place, but every time I’m in there I can’t help seeing myself the way I would view any other jerk who thought he was a comic artist.

Real drawing is done with the chewed up nubs of discarded pencils on the beaten and hewed remains of paper hand-towels.  The bereted flourishers of pedigreed pens onto cold-pressed semolina papier, who sip flutes of vintage ink are the pretenders.  Myself included.

Although the other side of me glows with pride at my German-made pencil sharpener that I had shipped from Canada because several professionals regard it as the best in the world.  Myself included.  (If you think there’s just the one blade involved, then I’m afraid you’re embarrassing yourself.)

A few of the design sketches for Aunika, done over a year or so: 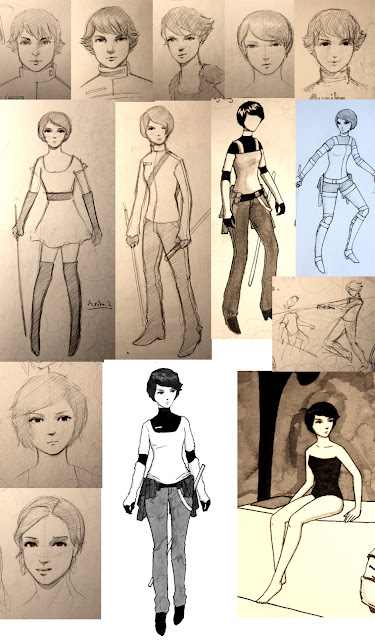 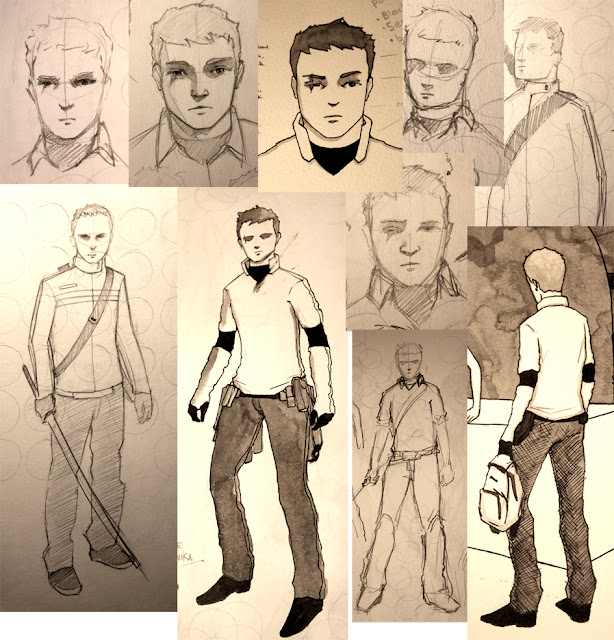 A page to practice using ink: 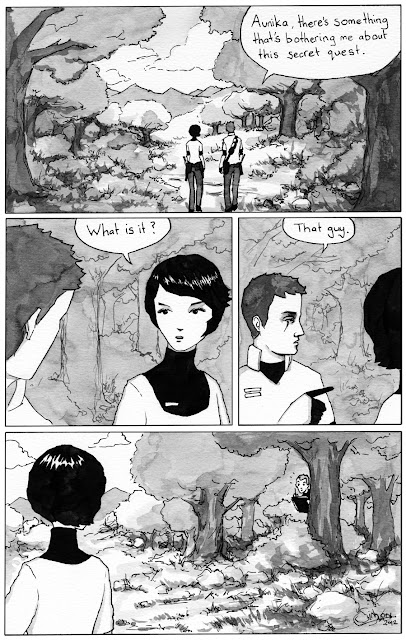 While working on this stuff I've generally been at uni full time and working around four days a week.  I don't work very hard on this stuff.  I get a handful of hours a week done on one day of the weekend, a day that I've even started to look forward to.

I wake up at the crack of dawn, and then realise I don't have to go to the office and immediately go back to sleep.  By about 11am I get up and make a cup of tea, take one sip of it and burn my mouth.  Then I draw circles for about 30 minutes, look over previous work and decide on a particular project, like a practice page, or some change to the materials.  Then I'll work for four or five hours before taking a second sip of now stone-cold tea which I throw away.

The next stage in the grand scheme is to start making the final-copy artwork.  In my timeline I've given myself three years to complete this step.  It's difficult to sit down one day and decide that you're now good enough to begin.

Last week I made a practice page using watercolour, instead of ink, for the shading.  After looking over it, I've decided for better or worse, it's time.

If in three years you see a pale, gollum-like creature scrambling around town, give me a wave. 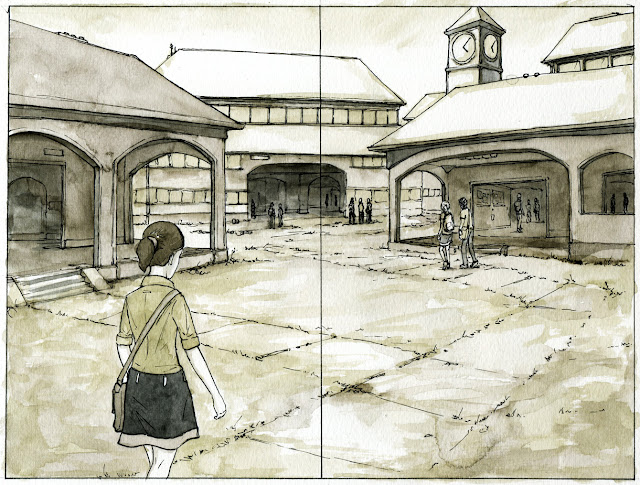