The following is a quote by Daniel Dennett in his introduction to a book by Bertrand Russell called The Conquest of Happiness.

“Bertrand Russell’s technical work in logic created the field mathematical logic (laying the foundations on which Alan Turing and others created the computer) and posed the central issues that have preoccupied analytic philosophers in universities ever since. His three-volume work with Alfred North Whitehead, Principia Mathematica, consists of hundreds of pages of formal proofs designed to establish all of mathematics on a firm logical foundation, and is one of the most unreadable great books ever written. But he was also a passionate antiwar activist in the public square, who went to prison during World War I for his pacifism, was deeply critical of Communism (since a meeting with Lenin in 1920, when he visited Russia to investigate the revolution), supported the war against Hitler, an evil greater than war itself, but later was an ardent antinuclear polemicist and outspoken critic of the Vietnam War. His appointment to a professorship at City College New York was reversed by the college administration, which declared him “morally unfit” because of his boldly expressed views on sexual morality.”

Here a few of my favourite Bertrand Russell quotes:

“Ethics is in origin the art of recommending to others the sacrifices required for co-operation with oneself.”

“Humankind has become so much one family that we cannot ensure our own prosperity except by ensuring that of everyone else. If you wish to be happy yourself, you must resign yourself to seeing others also happy.”

“Religion is based, I think, primarily and mainly upon fear.”

“Obscenity is whatever happens to shock some elderly and ignorant magistrate.” 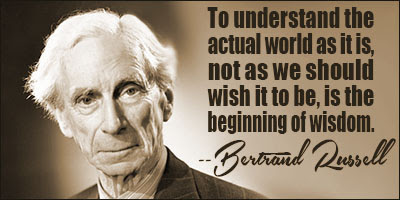 The point I’d like to make, however, is from the second half of Dennett’s introduction

“The Conquest of Happiness is a fascinating time capsule, a mixture including perennial observations that speak as clearly today as they did to its initial readers, and antiquated issues and attitudes that by today’s standards are offensive when they are not amusing. …Perhaps the moral to draw from this confrontation is that we should probably expect our grandchildren to be as uncomfortable with some of our attitudes as we are with some of Russell’s.”

It’s a fascinating and a wonderful thing to see the way that even the most prescient of social thinkers will always pass on instances of what will become the embarrassingly out-dated. For anything written by the most morally and rationally progressive geniuses to now appear to our culture as politically backwards is testament to the direction that our society is moving in.

It also raises an interesting question as to which of our current views our grandchildren will find embarrassing.

Yet another quote by Russell:

“When you meet with opposition …endeavour to overcome it by argument and not by authority, for a victory dependent upon authority is unreal and illusory.

This, I think may be the key to determining where the cracks in our ideas will show. The history of science is littered with embarrassments caused by appeals to what is obvious, such as the centrality of the earth, and the superiority of the white-skinned male to name only two.  Challenging even the most obvious ideas is the greatest tool we have for illumination and sanitation. And hopefully even this will one day seem like the crack-pot ravings of an almighty bigot.
Posted by Simon Petocz at 04:07 No comments: