How to Paint a Portrait

Painting is a lot easier than it looks.

It's easy to be put off by a really professional looking painting, but the big secret is that no matter how good they are at painting, the picture is going to look like crap for about 75% of the time they're working on it.

It's during this period where things just don't look good that everyone gets a strong urge to throw the painting and themselves in a bin, but if you just push through you'll be shocked by how well your picture can turn out.

To illustrate this I thought I'd paint a self portrait in a bunch of steps, and to prove that you don't need to rely on fancy materials or even a steady hand, I decided to use the classic MS Paint.

Actually I don't have MS Paint, so I'm using photoshop, but I'm only using the hard-edged paintbrush tool, and no fancy tablet, just a mouse, so that... 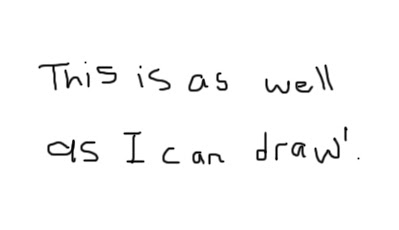 I used this picture for visual reference.  When doing a portrait you'll always need to have a picture of the person. Even if they're sitting there it's still a good idea. 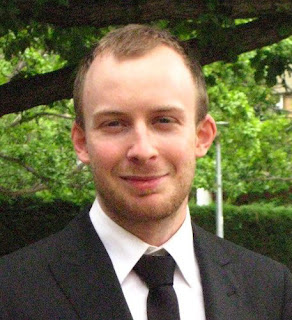 To start off I drew a circle and blob down the bottom for the jaw.  If I was doing a portrait for reals I would always cheat by drawing a grid on the picture and a grid on the page so that you can get all the features in just the right place.  But this is to show that it's not completely necessary. 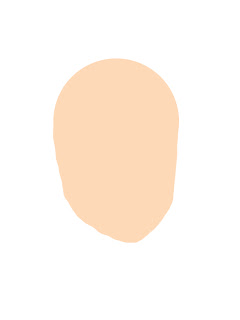 I scribbled in the rest of the head and body. Looking excellent already! 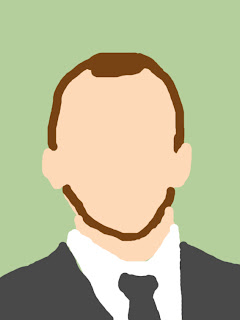 And then I put in two new colours. 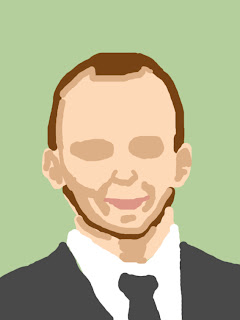 Next I put in some darker tones. 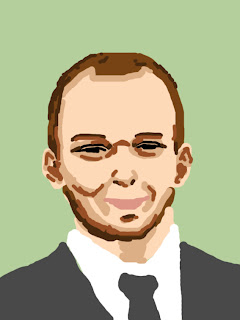 And then some lighter tones. 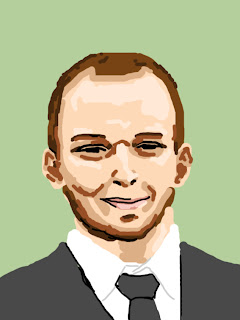 That is basically how I go about painting.  I throw a dark tone in and then I go back in with highlights, then I get a slightly lighter dark tone, then a slightly darker light tone.  It goes back and forth like this while you feel your way towards a balance between them. 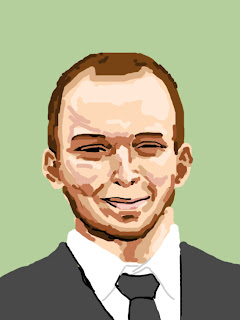 All of a sudden I've got a serious skin condition 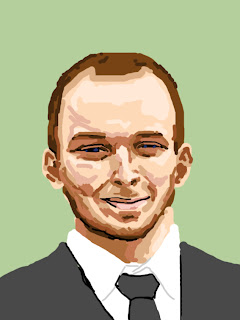 Not to mention a raging fur-face, and some big squinty eyes. 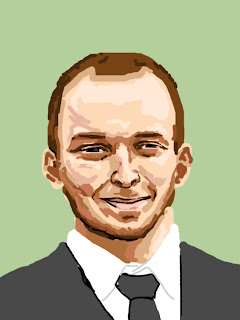 Here's the part that is really going to hurt.  I looked at the picture and noticed that my painting's head was too round.  Instead of giving up or starting again I just painted over it with the background colour until it was closer to the right shape. 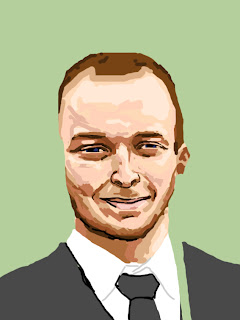 Now the head is less developed but the shape is better.
Also, those are some gorgeous lips. 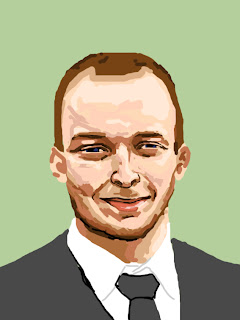 I've been going for a bit over an hour by this point, so it's a good time to take a bit of a break.

Painting is definitely a marathon, not a sprint.

A bit more beard and the hair goes on.  Suddenly things aren't as bad as I thought. 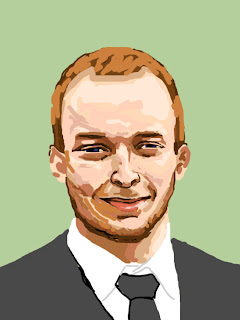 A bit more hair and fixing up the jaw makes the head look a lot better.  The biggest issue now is that the eyes are too big and a little misshapen. 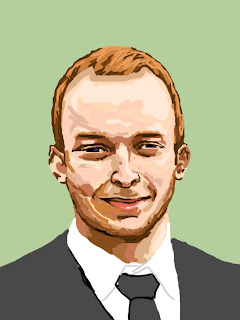 Working a little bit on the pupils is a good way to give yourself some well-deserved confidence.
The eyes always effect the picture a lot. 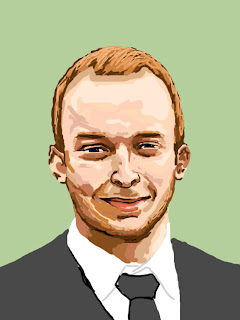 Not sure what the difference is between this the last one and the next one.  I probably just saved it twice.  We're looking at about 2 hours of work by now. 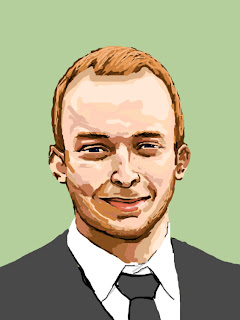 Everything's getting a little bit cleaner now, but it's a slow process. 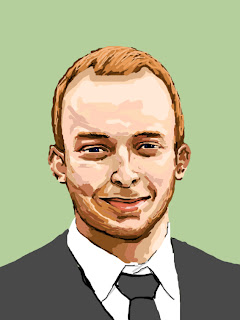 I'm still pushing the eyes back, lightening some of the heavy shadows.  Also the lips get a makeover. 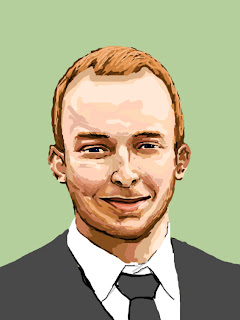 By now almost the whole face has been layered many times with different colours, back and forth.  And it's starting to come together, but don't give up now! It'll keep getting better. 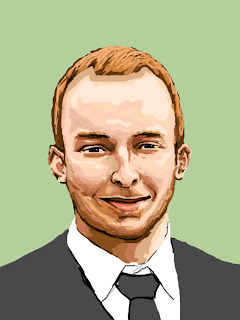 Here I start to go around and put mid-tones in between colours, so they look a bit smoother. 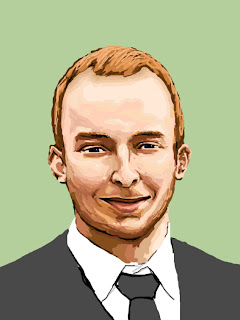 Now the things are starting to get smoother.  It must be at least 3 hours by now. 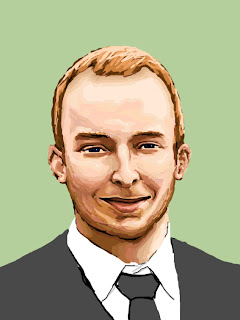 Now everythings had a bit of a polish and I put some tones into the clothes. 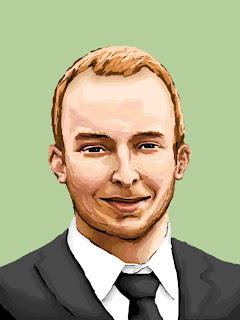 Just for fun I put a bit of a filter on to blur things up a bit.  I also threw a bit of blue into the eyes, just to add to the seductiveness. 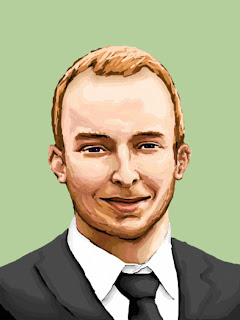 And hey! That's all there is to it!

The point is that for more than an hour it looked like a complete piece of crap.  I could easily have packed it in then, but I just kept working on it, fixing up all the little things and suddenly out of nowhere the picture pulls itself together.

If I had've been working with actual paint it would've been a lot quicker and easier, but it's good to know that all that stuff doesn't really matter very much.

If you just keep looking at your reference picture and don't feel afraid to follow it closely, even when it seems painful or ridiculous, you should wind up with something you can be proud of.

Posted by Simon Petocz at 22:30 No comments:

As a reader of the occasional scientific and politically progressive article I've noticed that discussion of homosexuality has found its way into a strange place.

On the one side you have conservatives who feel that homosexuality is wrong because it is a life-style decision, and on the other side there are gay-rights advocates saying that there is a biological basis for homosexuality and therefore it is acceptable.

I find it distressing that the enlightened view is basing an advocacy of liberty around the fact that there appears to be a genetic basis for homosexuality, because this implies that it would be unacceptable if homosexuality was simply a life-style decision.

The justification of human rights and personal liberty is not a matter of genetics.

The danger of basing a liberty argument on something as arbitrary as finding a gene that you think contributes to a certain behaviour is that it’s possible that the gene theory should be critiqued.  Diverting to an argument about gene-theory is not a step forwards, and if the theory is found to be incorrect, advocates of gay-rights will take an unnecessarily heavy set-back.

There are basic areas of the human brain inherited from reptile origins that advocate an entirely antisocial lifestyle of killing, raping, stealing etc.  That fact doesn’t make crime acceptable.

Similarly it would be ridiculous to dismiss a person’s achievements as merely a fatalistic product of their genes.  I also don’t hear anyone arguing that a life of pure altruism is wrong because it doesn’t have a direct biological basis.

People have a right to a personal liberty of behaviour that does not impinge on the freedom of others.  If you start dishing out liberty based on genetic determinism you go to a weird, confusing and face-palmingly annoying place.
Posted by Simon Petocz at 17:10 No comments: